The Shock Gun (ショックガン Shokkugan) is a weapon in The Ocean Hunter. It is used primarily by the game's protagonists, Torel and Chris, and various hunters.

The Shock Gun consists of a turret-like gun (top part) attached on top of/fused onto a diver propulsion vehicle (bottom part) with a meter built-in between the two components. Handles with separate built-in triggers, which can simultaneously move the Shock Gun and its user and fire shots, are attached by an extruding part on top of the weapon.

Depending on the region it was made in, the Shock Gun may vary with the length of its barrel and can be built with various colors and designs.

Player 2
Add a photo to this gallery

The Shock Gun fires small torpedo-like shots. The weapon seemingly has unlimited ammo, though it's most likely for gameplay purposes to avoid the hassle of collecting ammo during gameplay, but is limited to 5 shots per round.

Serving as the primary and only weapon in The Ocean Hunter, the Shock Gun is represented on-screen as the Sight[1] The Sight is depicted as a crosshair with two smaller crosshairs behind it that indicates the path of the fired shot. While the main crosshair follows wherever the player points their controller, the smaller crosshairs will change position to display the trajectory of the shot, depending on where it is aimed and which character the player is playing as, although in the latter's case it is to accommodate which side of the screen the player occupies when playing the arcade version.

The main crosshair differs in both the text flashing besides it and the color for both players:

Ammo is limited to 5 shots per round. The Shock Gun reloads automatically regardless of whether the current round is spent or not. 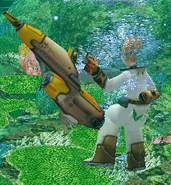 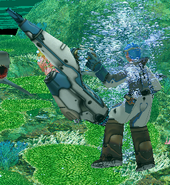 A hunter's Shock Gun
Add a photo to this gallery

Retrieved from "https://theoceanhuntergame.fandom.com/wiki/Shock_Gun?oldid=6137"
Community content is available under CC-BY-SA unless otherwise noted.