Start a Wiki
Rahab (ラハブ Rahabu) is a sea deity, initially believed to be a fictional aquatic subspecies of Gigantopithecus (Gigantopithecus thalassa cyclops), and the main antagonist of The Ocean Hunter. He is the seventh and final boss of the game and he is found in Panthalassa.

A sea deity born "from chaos", Rahab had been taking care of the ocean and its denizens for countless millenia. At some point in time, Rahab fell into a slumber that lasted for many centuries until he was awakened by the predations of humanity upon the sea. Angered by humanity's pride and disregard for ocean life, Rahab created the other Great Monsters of the Seven Seas except Midgardsorm and deliberately caused natural marine disasters (i.e. storms, typhoons) in an effort to humble humanity.

There are no records of the number of casualties he has caused, but local authorities have endlessly speculated on this creature's true identity and species. The bounty on the capture or death of this chaotic and mysterious creature is 20,000 G.

As Torel and Chris approach Panthalassa during a stormy night, Rahab watch the two from the waters below.

In the game, Rahab attacks Torel and Chris in three separate forms:

After defeating Vritra & Kaliya, Torel and Chris proceed to a nearby doorway. Upon approaching it, the two suddenly feel heavy stomping coming from behind said doorway ("What's that?!"). Dagon then comes out and lets out a deafening roar at the two adventurers. He then proceeds to attack them, prompting them to fight back.

Halfway into the battle, Dagon suddenly turns around and retreats ("He's running away. Go after him!") from the two adventurers. Although they give chase, they quickly lose sight of the aquatic colossus ("Where did it go?"). Before they can continue, Dagon suddenly appears from above on the ceiling. Although he has the upper hand, the two adventurers are able to shoot down his outstretched hand, causing him to lose his balance and crash onto the floor below. Assuming victory, Torel and Chris look briefly at the seemingly fallen colossus before heading for the exit.

Just before they can, Dagon suddenly revives himself as Poseidon, a blueish color swap of his Dagon form, and gets back up, much to Torel's and Chris' horror and shock. The colossus then forms and blows energy orbs at the two adventurers, prompting them to fight again. As the two press on, their efforts push Poseidon back step by step towards a wall behind him.

Eventually, they are able to corner Poseidon against the wall. Quickly looking around, the colossus grabs a nearby rusty trident and uses it against them. Despite the odds, however, the two adventurers are able to supposedly defeat Poseidon.

Undeterred by this, Poseidon transforms into Rahab, the true and final form of the very monster Torel and Chris have sought for. Now a demonic merman-like monster, completed with trailing elongated fins, sharp claws and teeth, and three eyes, of which the third eye is positioned at the center of his forehead, Rahab swims around the temple and proceeds to attack the two adventurers, who fight back again.

Near the end of the battle, weakened by their combined efforts, Rahab seizes both Torel and Chris with his tongue. He then attempts to throw off their aim by throwing them around before attempting to kill them. Despite the odds, however, Torel and Chris are able to defeat Rahab, causing him to release them and ending his reign of Panthalassa. Now truly defeated, Rahab sinks to the floor as a large nearby structure falls on top of him. Proud of their hard-earned accomplishments, Torel and Chris do a victory fist bump and leave the temple, but not before Rahab tells them his story.

After the cutscene, Poseidon will attack by forming and blowing energy orbs at the player. The player must fire at these incoming orbs first before shooting at Poseidon to damage him. However, the more orbs the player destroys, the faster Poseidon will create more. By reducing the monster's health by a quarter, Poseidon will be forced to take a step back and the attack pattern will repeat so forth.

This part will go on for three rounds. The first round has Poseidon forming slow-moving orbs. The second round consists of two to three fast-moving orbs. The last round is a mix of fast and slow orbs.

Once Poseidon's health is reduced to one-fourth, Poseidon will grab a nearby rusty trident and use it to strike down the player. The Sweet Spot will be revealed via a targeting reticle onscreen and the player must fire at it before the time limit runs out, which will be indicated by the proximity between the camera and the trident. It is suggested that the player quickly aim and fire slightly below or to the right of the bent elbow before Poseidon can execute the attack to score a direct hit. Poseidon will be defeated after taking three successful shots to the Sweet Spot.

After the cutscene, Rahab will briefly swim around the temple before attempting to claw at the player. The player must fire at the incoming claw to repel his attack. Rahab will then continue swim around again before trying to quickly bite the player. The player must quickly fire at his mouth to repel this attack. Th attack pattern will then repeat so forth. In the meantime the player can fire at Rahab while he swims around.

Once Rahab has about one-third of health left, after the cutscene, Rahab will now move the player (or rather the camera) around with his tongue before attempting to bite the player. Although it is not revealed onscreen, the Sweet Spot is his third eye at the center of his forehead, which will open seconds before Rahab can execute the attack. The player must fire continuously at this hidden Sweet Spot before the time limit runs out (ends around 2-3 seconds after the third eye opens). It is advised that the player fire with a steady aim slightly around or under the eye to score a possible hit. Rahab will be defeated once he takes three successful shots to the Sweet Spot.

The player has now defeated Rahab in his true form and has finally beaten the game.

In ancient Near East mythology, Dagon was a deity associated with fertility, vegetation, and military strength.

Some people believed that Dagon was worshiped as a fish god or a god of the sea, while others identify him as a god of grain and agriculture.[1]

In Lovecraftian horror, Dagon is a sea deity that presides over the Deep Ones, an amphibious humanoid race indigenous to the Earth's oceans. He is generally depicted as a gigantic sea monster with scales and fins, although his appearance varies greatly depending on the artist.

In Greek mythology, Poseidon was one of the most powerful of the ancient gods. Lord of the sea, he is a very moody god, capable of great wrath. He is generally depicted with a trident. In the Odyssey, Poseidon was an antagonist, since he constantly hampers Odysseus on his journey home for more than ten years.

The name Rahab refers to many monsters in different folklore and cultures.

In Jewish folklore, Rahab, who represents noise, tumult, arrogance, is a mythical sea monster, a dragon of the waters, and the "demonic angel of the sea". He represents the primordial abyss, the water-dragon of darkness and chaos. Later context had made Rahab a particular demon and an inhabitant of the sea, especially associated with the Red Sea.

In the Hebrew Bible, Rahab is used to indicate rage, fierceness, insolence, and pride.

In Judeo-Christian beliefs, Rahab was described to be "a serpent of chaos" which symbolizes the chaos banished by God during Creation. It is a powerful dragon demon, and is also known to the Philistines as Tiamat, the multi-headed dragon god. 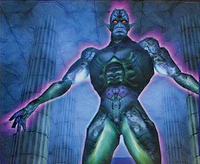 Scan from Dreamcast Magazine
Add a photo to this gallery

Retrieved from "https://theoceanhuntergame.fandom.com/wiki/Rahab?oldid=6242"
Community content is available under CC-BY-SA unless otherwise noted.