Start a Wiki
Midgardsorm (ミドガルズオルム Midogaruzuorumu) is a fictional species of giant earthworm (Lumbricus terrestris gigantesque) that resides in West Ocean. He is the sixth boss in The Ocean Hunter.

Midgardsorm is responsible and wanted for the mysterious disappearances of numerous ships. Current records report that he has swallowed over a thousand marine vessels, including ships and submarines, since antiquity.

The bounty on the capture or death of this legendary gigantic earthworm is 18,000 G.

After defeating Basilosaurus, which they have mistakened for as Midgardsorm, Torel and Chris watch as his corpse sank into the hole below ("Did we defeat him?"). Shortly after, the real Midgardsorm rises out from the hole and sucks in both the dead prehistoric whale and the two adventurers, the latter of which helplessly try to escape the strong current. Inside the giant worm, Torel and Chris traverse his insides and reach his heart while being besieged by parasites and coming across a diver. After destroying the heart, killing Midgardsorm and ended his reign of West Ocean in the process, the giant worm lets out one final bellow, allowing Torel, Chris, and the diver they encountered earlier to escape. 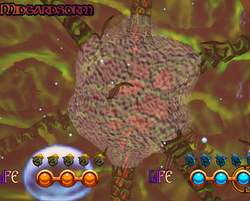 Because the player is inside Midgardsorm for the entire duration of the battle, the only Sweet Spot indicated via a targeting reticle onscreen is the monster's own beating heart. The player must continuously fire at it to reduce the monster's health.

During the boss fight, the overwhelming number of parasites surrounding the heart will continuously try to stop the player. The minute they latch onto the camera, immediately fire at them before refocusing on the heart to avoid taking damage. Alternatively, if two players are playing, one can focus on the parasites while the other on the heart.

The more damage the player inflict onto the monster, the faster the heart will beat and the more parasites will come at the player. Midgardsorm will be defeated once he runs out of health and when his heart explodes.

Midgardsorm refers to the Jörmungandr, also known as the Midgard Serpent, from Norse Mythology. According to the myth Odin threw Jörmungandr into the ocean that encircles Midgard, the realm of human civilization. The serpent grew so large that he was able to surround the earth and grasp its own tail. Consequently, if it lets go, the world will end.

It was predicted that during the events of Ragnarök, Jörmungandr will come out of the ocean to poison the sky. However, it will be slain by its arch-nemesis Thor, who will later die after walking nine paces due to being poisoned by the serpent's venom. 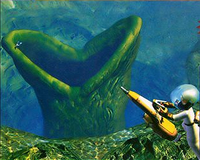 Scan from Dreamcast Magazine
Add a photo to this gallery
Retrieved from "https://theoceanhuntergame.fandom.com/wiki/Midgardsorm?oldid=6241"
Community content is available under CC-BY-SA unless otherwise noted.