Start a Wiki
The Leviathan (レヴィアタン Revyuatan) is a megalodon (Carcharodon megalodon) that resides in Luna Sea. He is the second boss in The Ocean Hunter.

Created by Rahab to oversee Luna Sea, the Leviathan has rammed ships to pieces and swallowed fleeing divers whole. The scars received from past attacks and attempts to kill the monster add to his fearsome appearance. As of now, Leviathan has a record of sinking 11 ships and 364 deaths.

The bounty on the capture or death of this massive prehistoric shark is 8,000 G.

Prior to the events of the game, the Leviathan attacked and sank a ship out far from shore at Baroque Sea[1].

After they arrived at Luna Sea in search for the Leviathan, Torel and Chris arrive at the underwater ruins of an ancient city, where the megalodon is rumored to be. While traversing the ruins, the two stumble upon the Leviathan, which immediately attacked them, prompting them to fight back. During the battle, many of the sharks in the surrounding area come to the Leviathan's aid.

Halfway into the battle Torel and Chris lose sight of the massive shark and they scout out the area. Not long after, the Leviathan suddenly burst out from a nearby structure below and attempts to kill them from there. Despite the odds, however, Torel and Chris are able to defeat the monster, ending the Leviathan's reign of Luna Sea.

Once his health has been reduced to half, the Leviathan will back up slowly while the camera quickly focuses on two sharks coming at the player from below. Once they're out of the way, the camera will look back up ("It's gone! Where did it go?") shortly before the monster reappears. At this point the Leviathan will try to bite the player, but not before opening his mouth and slowly shaking his head sideways. The Leviathan's Sweet Spot will also be marked by a targeting reticle onscreen. The player must fire at the Sweet Spot before the time limit runs out, which will be indicated by the proximity between the player and the Leviathan. The Leviathan will be defeated once he receives three successful shots to the Sweet Spot.

In the Old Testament, the Leviathan was a "chaos animal" in the form of a sea monster. It later would come to be viewed as an "anti-divine" symbol of evil that would be killed on Judgement Day.  The Leviathan, viewed as huge and unstoppable, also figures into the mythologies of Canaan and Ugarit, two Middle-Eastern city-states. The word later came to be used as a term for "great whale", as well as for sea monsters in general. 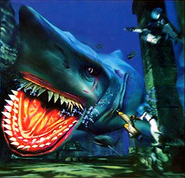 Scan from Sega Saturn Magazine
Add a photo to this gallery

Retrieved from "https://theoceanhuntergame.fandom.com/wiki/Leviathan?oldid=6234"
Community content is available under CC-BY-SA unless otherwise noted.