Start a Wiki
Karkinos (カルキノス Karukinosu) is a giant Japanese spider crab (Macrocheira kaempferi) that resides in the North Sea. He is the fifth boss in The Ocean Hunter.

Created by Rahab to oversee the North Sea, Karkinos is responsible for the near extinction of the whale population in the North Sea and 15 divers who were investigating the incident.

The bounty on the capture or death of this monstrous crustacean is 15,000 G.

After defeating Medusa and her jellyfish minions, Torel and Chris arrive at a spot where most of the dead North Sea whales were found on the sea floor. Shortly after looking around, Karkinos suddenly appears from behind and attacks the two adventurers, who promptly fight back.

Halfway into the battle, Torel and Chris attempt to retreat, but Karkinos swiftly blocks their path with his claws and attempts to kill them there. Despite the odds, however, Torel and Chris are able to defeat the monster, ending Karkinos' reign of the North Sea.

The boss fight is split in three distinctive parts.

Karkinos will first try to swipe the player with one of his claws. The player must rapidly and continuously fire at the incoming claw. Depending on the angle and direction the claw is coming from, it may be difficult to score direct shots at it, but possible if aiming slightly below the claw. Once the player has blasted enough shots at the incoming claw, Karkinos will back away and the attack pattern repeats so forth. The player may continue to fire at Karkinos before the next attack.

After one-third of his health is gone, Karkinos will pin the player character to the sea floor and try to trample them with three of his legs. The player must fire at the incoming legs as they get near the camera. It is recommended to shoot the legs in a pattern (i.e. left-middle-right) to avoid being overwhelmed by the attack.

Once his health is reduced to almost a half, after the cutscene, Karkinos will try to bite the player. From here on, the Sweet Spots will be revealed via the targeting reticles onscreen and the player must fire at them before the 5-second time limit ends to avoid taking damage. Aim and fire slightly under his eyes - the shots will "float" up to his eyes. Karkinos will be defeated after taking three successful shots to the Sweet Spots.

In Greek Mythology, Karkinos was a giant crab which came to the aid of the Hydra in its battle with Herakles at Lerna. The hero crushed it beneath his foot but as a reward for its service, the goddess Hera placed it amongst the stars as the constellation Cancer. 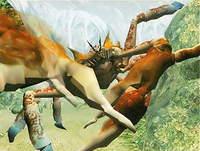 Scan from Dreamcast Magazine
Add a photo to this gallery
Retrieved from "https://theoceanhuntergame.fandom.com/wiki/Karkinos?oldid=6240"
Community content is available under CC-BY-SA unless otherwise noted.