Throughout the course of their adventure, Torel and Chris will come across several other hunters and divers. Some of them may be doing their own business such as hunting or finding treasure. However, there are some whom the protagonists must save from ordinary marine predators and, in one case, a sub boss.

By rescuing these hunters and divers-in-distress, the player will be rewarded one health unit or a treasure chest if the player presently has five Life Points. If they are shot, even if they're not in danger, the player will lose a Life Point. Failure to rescue them without any friendly fire results in neither.

There are two divers in this stage. The first diver appears in the stage's opening cutscene and the second diver when White Death makes its debut. There are also many other divers present but they are seen either attacked by sharks or fleeing during the opening cutscene.

The first diver is seen panicking in fear as he is about to be attacked by sharks. Luckily, Torel and Chris dive into the scene in time and shoot the sharks, saving the diver. The diver thanks the two as he swims over to them and points the way to the Kraken.

The second diver appears later ("My god!") being pursued by White Death ("A big one is coming"). The diver momentarily stops in front of them to beg for help ("Help me.") before continuing to flee. Torel and Chris must shoot at White Death to reduce its health to half in order to draw its attention away from the diver. After the great white is defeated, the diver swims over to them and gives both his thanks and a health unit before cheering them on.

Just before Torel and Chris encounter Hydra, they come across a diver towing a treasure chest on his Shock Gun. He warns them of the monster(s) up ahead ("Danger here!") before swimming away.

Shortly after Torel and Chris arrive at the underwater ruins, they spot a hunter in the distance. He is briefly seen shooting at sharks with his Shock Gun ("Help that hunter!") before the two's attention are diverted to a few incoming sharks. Shortly after, a shark suddenly appears and destroys the hunter's Shock Gun, forcing him to flee. Torel and Chris must shoot the sharks pursuing the hunter without harming him. After successfully doing so, the hunter swims over to them and gives both his thanks and a health unit before cheering them on. 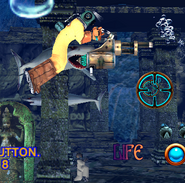 The secret diver, below the hunter
Add a photo to this gallery

There is only one miner in this stage. He appears just before Scylla makes its debut.

While Torel and Chris were fighting several hostile lanternfish and gulper eels, the miner suddenly appears from below, begging for help ("Help me."). Shortly after he swims past the two, they realize that he is being pursued by a few gulper eels, which they must shoot without harming the diver. After the enemies are defeated, the miner swims to them and gives both his thanks and a health unit. He reveals that a big monster attacked his team near the cave before sadly revealing that he's the sole survivor. The miner then retreats to the surface, but not before telling them to "be careful".

There is only one hunter in this stage. He appears just before Torel and Chris arrive at the ancient underwater city.

Unlike the previous hunters, this hunter wears a modified dive suit and is equipped with a snorkel and a speargun instead of scuba gear and a Shock Gun respectively.

After Torel and Chris pass under a bridge, they suddenly see the young hunter slipping off his broken raft and into the water. As he desperately tries to swim back up, the commotion attracts some of the nearby piranhas. The two hunters must shoot these piranhas without harming the hunter before they reach him. After successfully doing so, the hunter swims over to Torel and Chris and gives both his thanks and a health unit. He tells them that his father was killed by Ahui before asking them to defeat the monster. The hunter then swims back up to his raft.

There are three divers in this stage. They all appear in a consecutive order before Torel and Chris encounter a school of jellyfish and Medusa.

The first diver is briefly seen mining on an iceberg, uncovering a half-buried treasure chest.

The second diver, towing a treasure chest, comes straight after Torel and Chris turned their gaze away from the previous diver. The two hunters briefly look at him ("Treasure! More treasure!") before noticing a nearby corpse of a baby whale.

The third diver is seen after Torel and Chris defeated the lampreys that were hiding in the dead baby whale. This diver panics ("No, it's trying to get into my body!") as two or three lampreys attach themselves onto their newfound prey. The two adventurers must carefully get rid of the lampreys before it's too late. After successfully doing so, the diver swims over to them and gives both his thanks and a health unit. He tells them that Karkinos had killed the entire whale population of North Sea before warning them not to press on, claiming that it's "dangerous". The diver will then retreat to the surface.

The third diver (being attacked)
Add a photo to this gallery

There is only one diver in this stage. He is located inside Midgardsorm's stomach, just before Torel and Chris find Midgardsorm's heart.

Unlike the previous divers, this one isn't being attacked upon meeting him and has a rather peppy attitude. He also possesses a gold crown, a treasure chest, and a sword in a golden scabbard, all of them undoubtedly scavenged from the ship graveyard.

After being sucked into Midgardsorm, while Torel and Chris were traversing the ship graveyard inside the monster, the diver calls out to them from behind a broken mast and swims out to talk. He tells them that he has been inside the beast for 10 days and points the way to the heart. He then laments that there are a lot of parasites surrounding the heart before wishing the two hunters luck.

Should the player not accidentally shoot him, shortly after Torel and Chris destroy Midgardsorm's heart, the diver can be seen peeking in the background. He is later seen being dragged out of the dying Midgardsorm by Torel, or Chris if Player 2 is playing solo. As the three escape, the diver's prized possessions can be seen flying out of his grasp much to his dismay.

There are no hunters or divers present in this stage, likely due to the treacherous conditions and nature of the sea.

Retrieved from "https://theoceanhuntergame.fandom.com/wiki/Hunters_and_Divers?oldid=6226"
Community content is available under CC-BY-SA unless otherwise noted.