Start a Wiki
The hot air balloon is an aircraft in The Ocean Hunter.

There is also a platform connected to a pole that can extend down from the bottom of the aircraft to the deeper depths of the sea.

The hot air balloon is only seen during the opening cutscene of each stage (except Texcoco Great Lake) throughout the entire game. It acts as the primary mode of transportation for Torel and Chris.

In-game appearance, with Torel riding in it (high score list) 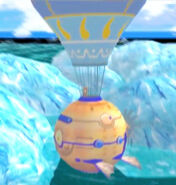 Side view (at North Sea)

Back view (at Tartarus Deep)
Add a photo to this gallery
Retrieved from "https://theoceanhuntergame.fandom.com/wiki/Hot_air_balloon?oldid=5503"
Community content is available under CC-BY-SA unless otherwise noted.