Start a Wiki
Ahuizotl (アーウィーソウトル Āuyīsoutoru), nicknamed Ahui by the locals, is an Elasmosaurus (Elasmosaurus platyurus), a marine reptile that resides in Texcoco Great Lake. He is the fourth boss in The Ocean Hunter.

Created by Rahab to oversee the Texcoco Great Lake, Ahuizotl primarily targets and attacks nearby lakeside settlements. So far, he has raided two towns and killed eighteen people, of which six were eaten.

The bounty on the capture or death of this marine reptile is 12,000 G.

When Torel and Chris approach one of the structures in the underwater Aztec ruins, they can see what appears to be Ahuizotl's neck inside and they move to the side of the doorway. When they peek back inside, they quickly back away in surprise as Ahuizotl swims out and roars at them. He then proceeds to attack them. In response the two adventurers promptly fight back.

Halfway into the battle, while Ahuizotl is distracted, Torel and Chris make an escape to the surface and land on top of a near-sunken structure. An enraged Ahuizotl pursues after them and resumes attacking them. Despite the odds, however, Torel and Chris are able to defeat the monster, ending Ahuizotl's reign of Texcoco Great Lake.

Ahuizotl will first swim around the area before charging at the player while turning his head either left, middle or right to indicate where he will attack. The player can change his angle of attack by shooting to either left or right of Ahuizotl's head. When he approaches the player, the monster will move to bite once or more at the player. The player must repeatedly fire at his mouth to repel his attack. By successfully doing so, Ahuizotl will retreat into a distance and the attack pattern will repeat so forth.

After Ahuizotl's health is reduced to half, after the cutscene of the player character retreating above the surface, the player will have to fight the monster above water. At this point, Ahuizotl will raise his head out of the water in an attempt to bite the player, and his Sweet Spot will be revealed via a targeting reticle onscreen. The player must fire at the Sweet Spot before the time limit runs out, which will be indicated by proximity between the player and Ahuizotl to avoid taking damage. Ahuizotl will be defeated once he receives three successful shots to the Sweet Spot.

Ahuizotl refers to an ancient Aztec monster that supposedly has a dog-like appearance and has waterproof hair that often clumps up into spikes, hands capable of manipulation and an additional hand on its tail. The ahuizotl is a man-eating monster and is said to live in or near the water to hunt such prey. Anyone who is unfortunate to encounter it are dragged into the depths by the hand on the end of the ahuizotl's tail and are drowned. Aztec beliefs state that such victims are destined for paradise of the water god Tlaloc.

The name may also refer to the eighth Aztec emperor of the same name. Ahuizotl was known to be an aggressive and dynamic emperor, and had conquered 45 Mesoamerican territories during his reign. 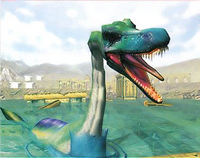 Scan from Dreamcast Magazine
Add a photo to this gallery
Retrieved from "https://theoceanhuntergame.fandom.com/wiki/Ahuizotl?oldid=6239"
Community content is available under CC-BY-SA unless otherwise noted.